Brief history.
Built by General Motors Diesel/Electro-Motive Division, the EMD GP40-2 (Dash-2) is a four-axle road switcher diesel-electric locomotive evolution of GP40 series. By the early 1970s, many first generation diesels were reaching the end of their service lives. The most common replacement locomotives became the GP40-2. EMD began production of the 16-cylinder, turbocharged, 3000 horsepower engine in 1972. These locomotive were developed for service where higher horsepower and faster service were preferable. A major feature for the GP40-2 was the introduction of the “dash 2” modular electrical cabinet.
These were powerful turbocharged locomotives, using a 16-cylinder 645E3 prime mover to produce 3,000hp. Since they were based on the improvements of the Dash-2 line, they were also extremely reliable compared to their GP40 cousins. Over 1.200 units were built: 903 of the original domestic model, 233 of the wide-cab (Canadian-built) GP40-2L, among many rebuilds; such as the MK Rail GP40-2WH. The major users of GP40-2 road-switcher were Baltimore & Ohio/Chessie System (with a total of 218 engines) and Conrail (129 units delivered from 1976 to 1980).
Externally, the GP40-2 was virtually unchanged during the transition to the "Dash 2" line, except for the small, oblong-shaped water-level sight glass window located on the right-side of the long-hood. towards the front of the radiator intake. Overall, the difference between a late-GP40 unit and an early GP40-2 unit are barely perceptible. On the inside, however, is an entirely different story. First and foremost, the most prominent change was with the wiring (akin to the rest of the series). Transistors, printed electrical circuit boards, and a control system featuring solid-state modular components were the hallmark of the radically redesigned "Dash 2" electrical system. The elaborate maze of hardwired circuitry, ponderous relays, interlocks, and bulky switches that defined the electrical systems of earlier locomotives were gone for good. Early to mid-production Phase-2 production lot of GP40-2s were built from mid-1976 through late-1979. Several major spotting features of Phase 2 units include: an 88” low nose (total lenght of locomotive increased to over 18,00 meters), corrugated radiator grilles and notched step wells. The late variants from 1980 to 1986 introduced a new interior cab design and further improved some electrical components.
For more than 40 years, the GP40-2 has worked main line freights, locals, switching jobs, yard service, and helper service. Many remain in service today. 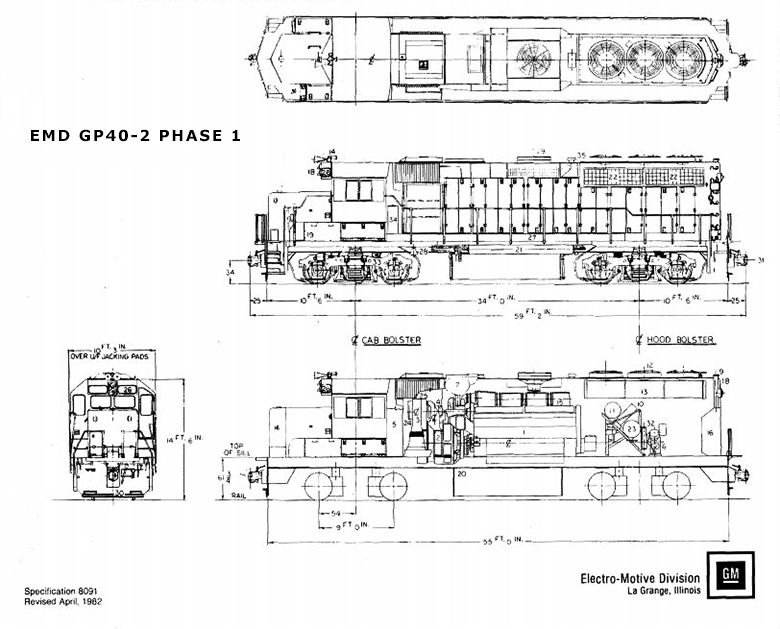 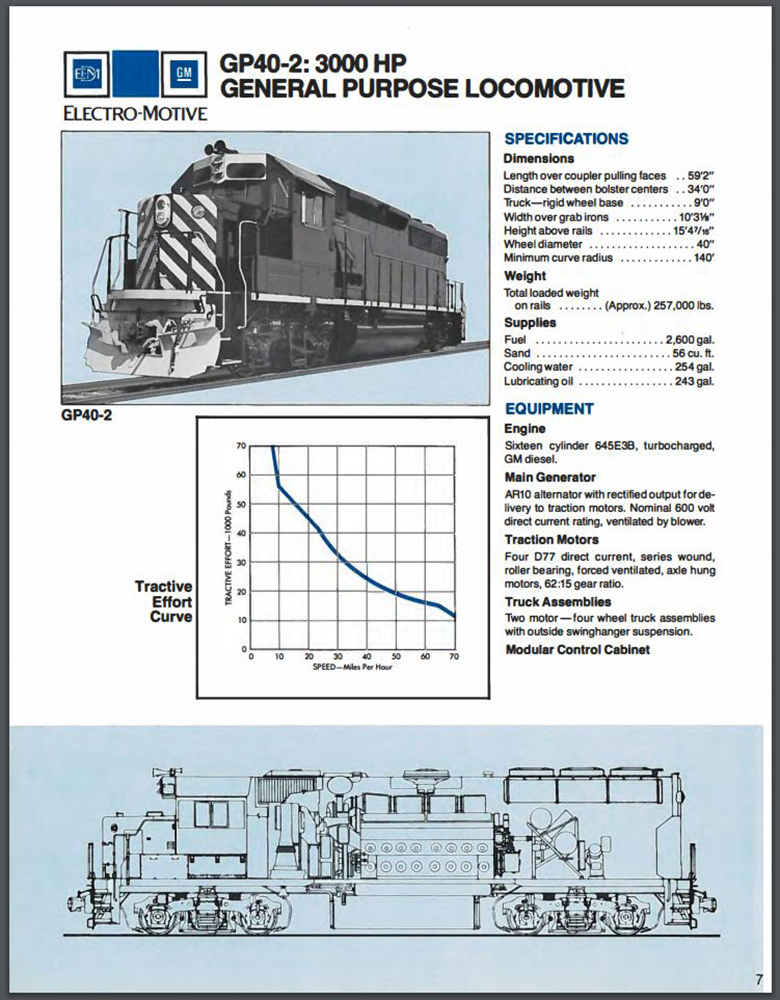 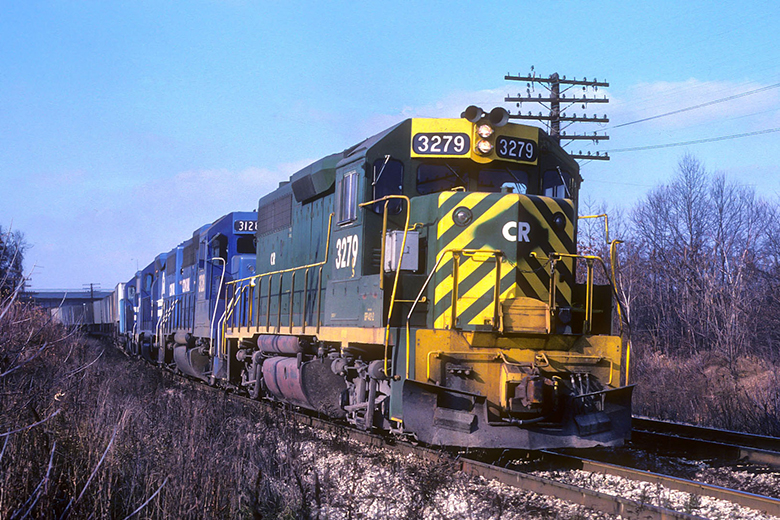 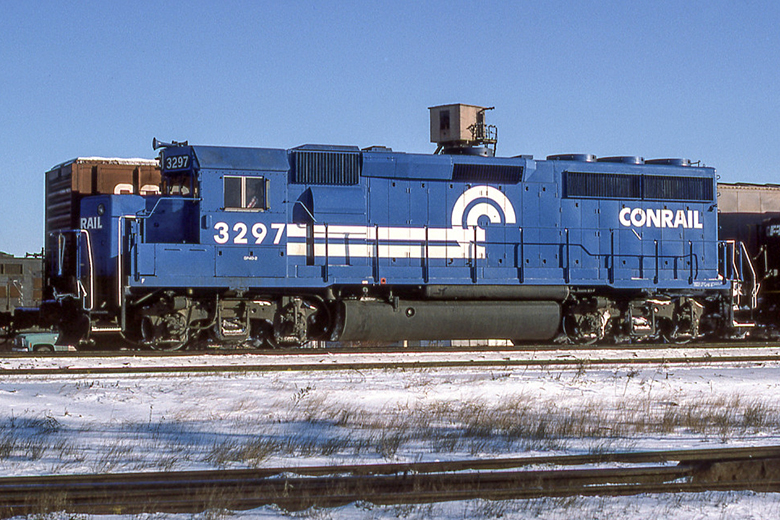 EMD GP40-2 Phase-1B Conrail #3297 in blue livery during 1977.
Conrail number #3277.
When they entered service in the early days of Conrail, the GP40-2 were the most modern diesel locomotives on duty. Conrail inherited its first GP40-2 locos from Reading. These Phase-1 five units ex-RDG 3671-3675 (other units were delivered to Delaware & Hudson RR) only carried 2.600 gallons of fuel and were not equipped with the self-loading feature associated with trouble shooting operations. Based on the improved electronics of the Dash-2 series, the GP40-2 was a reliable locomotive designed primarily for high-speed intermodal service, though they also found themselves in regular merchandise service. Since all the units were equipped with cab signals (for the engine #3277 only since at the end of 1978), they could be found nearly everywhere on Conrail's system, though at first they tended to appear more regularly in the Eastern section of the system. With its basic Reading green paint, number #3277 operates on ex-Reading and ex-Lehigh Valley lines until the end of 1981, when it received the CR's blue livery.
EMD GP40-2 Conrail #3277 data
Road Number: 3277
Type: B-B diesel locomotive
Builder: EMD
Built: 1973
CN: 73624-3
Disposition: to CSX 4401 from 1999, September
Previous owner: Reading
Remarks: ex RDG-3673
Assignment: =
Units in CR roster: 128 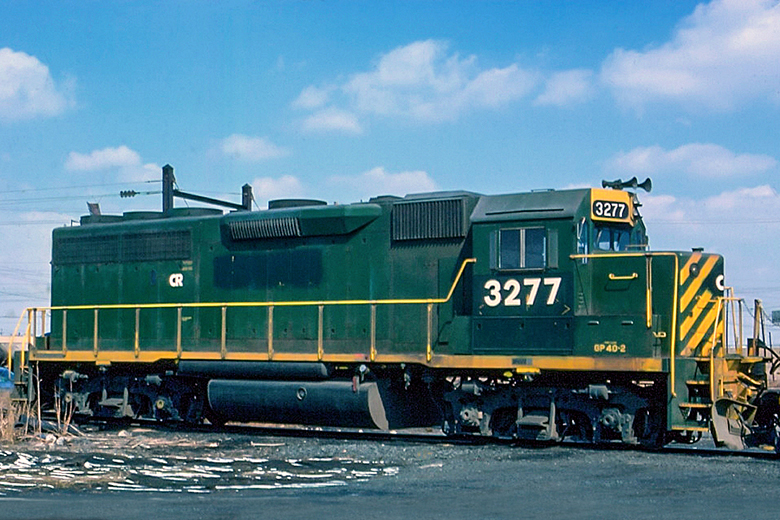 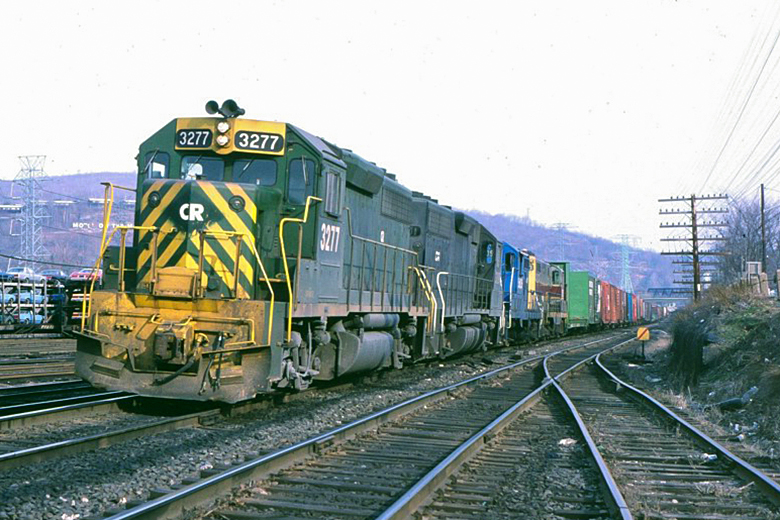 The Athearn Genesis GP40-2 Conrail #3277.
Genesis is the brand of Athearn that certifies the "top-of-the-line" about HO scale model production of this US company. The new release of EMD GP40-2 diesel locomotive tested here, took place in early 2020.
The packaging.
As usual, the presentation of the Athearn models is of a good standard. The packaging for the production about Genesis brand is classy and particularly robust and reliable, as well as with a pleasant aesthetic. The boxes, painted with traditional Athearn's dark blue, it is made with excellent quality cardboard. The packaging and product housing guarantees extreme safety during transport, handling and storage. The replica of the locomotive is screwed to a wooden base. 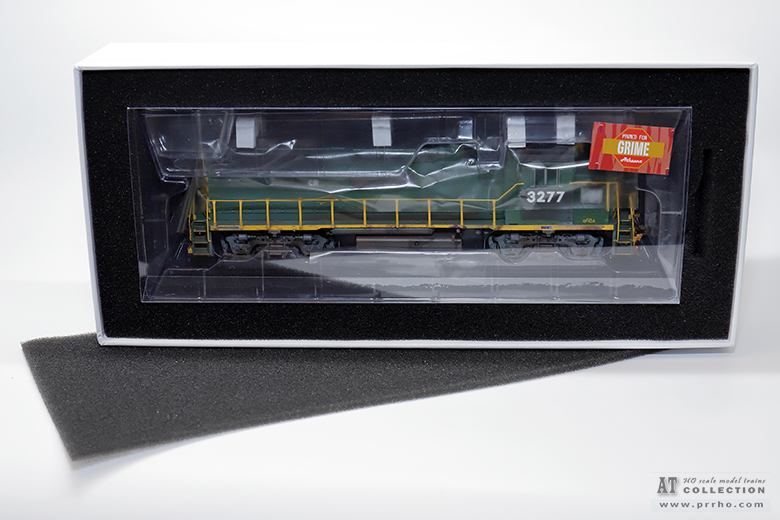 Out of box.
The model submitted for review is a replica of the unit road number #3277 in service with Conrail from 1976, 1 April. This engine wore its former Reading livery until the second half of 1980, before being painted in the typical and definitive blue Conrail. The replica is faithfully reproduced, with all its general characteristics. At first sight, we notice the high quality with which the model was built.

Spotlight.
As already explained in the introduction, Athearn's GP40-2 model is extremely detailed, with the presence of all the main external components, present on the real prototype, correctly reproduced. Sometimes, however, the assembly of some components is not perfect and needs to be fixed. For example (as can also be seen from the image below), the sinclair antenna came out of its seat. Another mistake found on our item is the signal-box mounted upside down. We report that the real #3277 it had no signal box, probably until all of 1978 (see photos above).
Among the features we point out the sliding side windows of the cab (this has interior details). These are very delicate and slip easily. The ditch lights are not functional on this variant (probably, they are operational on replicas of real locomotives built in more recent times). 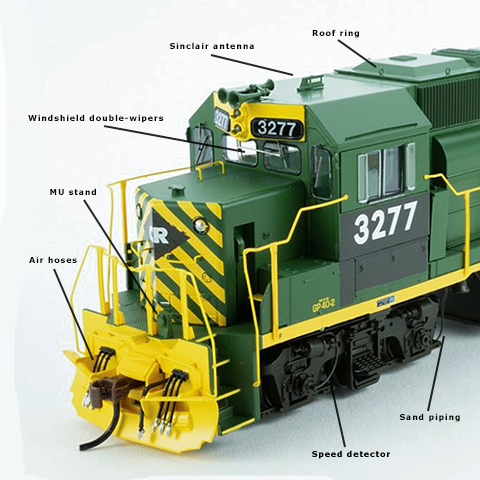 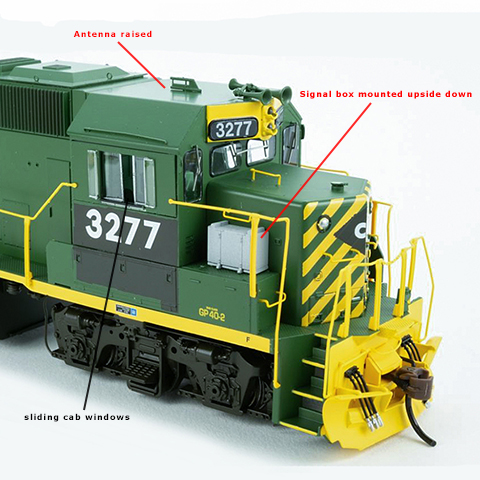 Sound features.
All the new production of GP40-2 by Athearn is equipped with an amazing Tsunami 2 sound decoder. The sound reproduction is sensational, balanced and correct (the sounds of the characteristic 16-cylinder EMD are faithfully reproduced). Even at maximum volume, listening is never disturbed by distortions. Obviously, the deeper bass frequencies are missing but the sound is equally powerful.
Complete list of sound options:
On running.
We tested the model's run on our track, powered with a Digitraxx 5-amp booster. Operation is perfect, both at low speeds (for the switching) and at full power (for hauling heavy consist).
PRRHO.com custom weathered and improved model.
The weathering work about PRRHO.com model it was made to be set in the three-year period 1976-1978 of the Conrail Early Years project in HO scale. The necessary improvement work was minimal, as noted above. See the images here below to read further tweaks. Weathering is relatively light, as the unit was built for Reading only few years earlier, in 1973. 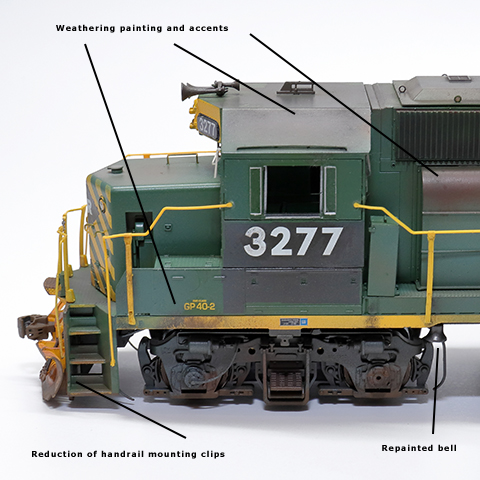 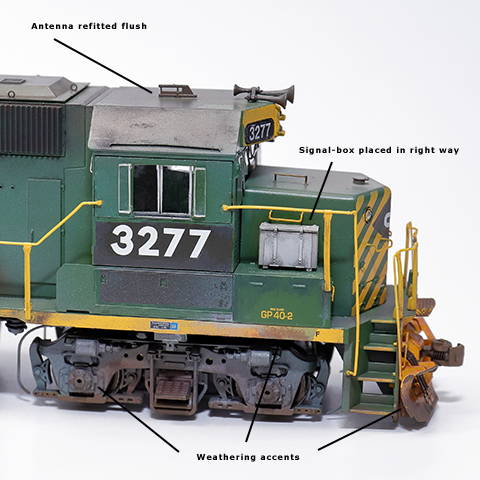